Back to Dubois Home Page 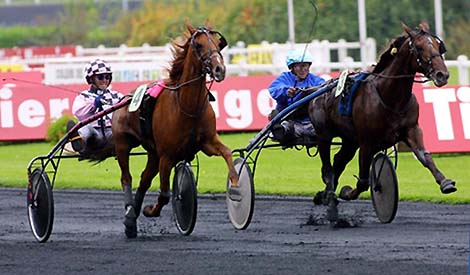 22/12 : Prix Une de Mai (Sca.). A disastrous start and Liberté, Lara du Goutier, Like A Nevele and Life Is Good were cantering in the first two hundred meters. Nevertheless, Léda d'Occagnes (CYGNUS D'ODYSSEE) has shown an high potential to win easily the first semi-classic race given to the fillies.
At 1 : 15 PM, Kiwi (COKTAIL JET) had dominated a serious Kangone (DEFI D'AUNOU) in the Prix de Château Chinon. 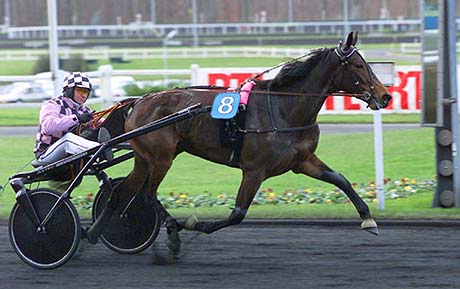 17/12 : And the beat goes on! Each day brings to us blue chips for tomorrow. Today, impressive in the last turn, L'Aunou du Fier, a filly by BUVETIER D'AUNOU, keeps a small advantage on Life Is Good, a filly by DEFI D'AUNOU, in Prix des Hortensias. Third, Let's Go Darling, by COKTAIL JET, was very efficient in the last two hundred meters.

5/12 : Limited Edition (CYGNUS D'ODYSSEE), always at her best, is placed second to Lara du Goutier, in Prix Vourasie, the first main event in the selection of the fillies.

3/12 : Many promising horses have impressed this afternoon, particularly a colt and a filly by COKTAIL JET, both winners, Kiwi and Let's Go Darling, the lattest dominating L'Aunou du Fier (BUVETIER D'AUNOU).
The Leading French Sire in 2000 had earlier seen his Hawaïan Melody at her best.
Then Kita Dream by EXTREME DREAM won the last race.
A perfect journey!!!

30/11 : Qualifications : 1' 16 for Leader du Bouquet (AND ARIFANT) and 1' 17 for Lutin du Bouquet (BUVETIER D'AUNOU), both trained by Jean-Baptiste Bossuet for Ecurie Ténor.

24/11 : Is Liberté (BUVETIER D'AUNOU) scared of darkness? She wins in the daylight, after a cupple of night faults. Today, she defeats Like A Nevele, by DEFI D'AUNOU, second but disqualified, and Leda d'Occagnes, by CYGNUS D'ODYSSEE, in Prix des Bégonias. Three races later, his half-brother, the promising Jest (1' 16 3 - 2 850 m) is an excellent second in Prix des Alpes.

22/11 : Jardy (CYGNUS D'ODYSSEE) resists to many attacks along the way, but must surrender himself to Jairo des Veys, often his main challenger, who beats him in the last meters of Prix Jacques Olry (Scm.) at Vincennes.

20/11 : A few days after Kourgana and Kelle Emotion, another filly by DEFI D'AUNOU, this time a 2-y-o, Life Is Good, shines on the dark track of Paris - Vincennes.

15/11 : A nose for KAISY DREAM, dominating Kaiser de Mormal and Kiss Français in Prix Abel Bassigny (Sca.), but he had 25 meters of disadvantage at the start. 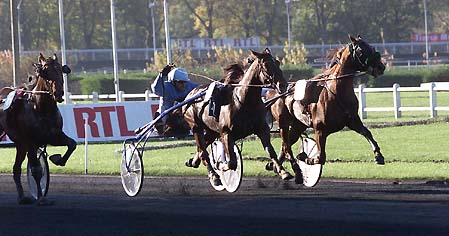 6/11 : Two blue chips for the future semi-classic races of the winter, the dancer Kelle Emotion (DEFI D'AUNOU) and the daughter to champion mare AUTOUR D'AUNOU, Kundera (COKTAIL JET) have frankly dominated Prix Gyptis (1' 16 - 2 200 m) during the first evening of the meeting.

5/11 : He is getting better and better... Jardy (CYGNUS D'ODYSSEE) is third (2 725 m - 1' 15" 6) in the main event of the Opening Day of the Paris - Vincennes Winter Meeting, Prix Octave Douesnel (Sca.). Today, he was starting twenty-five meters behind the leaders.
By the same Sire, Kasoar de l'Iton wins the good race for 3-y-o's (monté) and the 2000 Leading French Sire BUVETIER D'AUNOU brings home "the very first" with Jessie Jet.

02/10 : Will EXTREME AUNOU follow the stairway to heaven drawn by his famous half brothers BUVETIER D'AUNOU and DEFI D'AUNOU? His Leader de Monchel is an impressive winner against good colts at Vincennes.

Back to Dubois Home Page